Obituary of Gladys May Sanfason

It is with heavy hearts that we announce the passing of one of Lake Arrowhead’s oldest Members and mother of the President of the LAC Board of Trustees:

Gladys (Noftle) Sanfason, age 102, passed from this life to be with her Lord and savior on October 18, at Pond’s Edge Assisted Living Facility in Zephyrhills, FL, surrounded by friends and family. Gladys lived a remarkable life. Born in Ramsgate, England on July 4, 1920, Gladys emigrated to America at the age of five with her parents William and Ethyl Noftle and her Sister Edna and settled in Everett, Massachusetts. Gladys graduated from Everett High School in 1938 having achieved nine years of perfect attendance. Gladys worked in Boston for Jocelyn Cabinet and Fixtures as a bookkeeper for four years before meeting the love of her life Sergeant Ben Sanfason, who was in the US Army 10th Coast Artillery Bn, based in Fort Wetherell, RI. Gladys and Ben were married Christmas Eve, 1942 by a justice of the Peace in Manchester by the Sea, Massachusetts.

During WW2 Gladys worked as a Department of the Army Civilian in the finance  department at Fort Adams, RI. After the war Gladys and Ben lived in Everett, MA until 1950 when they moved to Burlington Massachusetts to raise a family of two boys and two girls. Gladys went to work for the Burlington Public Schools as secretary and worked her way up to  become the executive secretary of the Burlington Superintendent of Schools. Gladys and Ben retired in 1981 and moved to Tamworth, NH. In 1983 they moved to Lake Arrowhead in Waterboro, Maine to their dream lake home. In Lake Arrowhead Community Gladys taught line dancing and she and Ben enjoyed boating and fishing on the lake. In 1985 her beloved Ben passed away. Gladys purchased a home in Clermont, FL and spent her winters there until moving to Zephyrhills, Fl in 2006.

In Sweetwater Park in Zephyrhills, FL on Veterans’ and Memorial Day Gladys would recite the poem “In Flanders Fields” from memory. She did this well into her hundreds. On July 4th 2020 a huge celebration took place at Lake Arrowhead in Maine commemorating Gladys’ 100th birthday. Her whole family attended. Boats came by the dock and boaters sang her happy birthday. She received congratulatory letters from Queen Elizabeth and President Trump. Gladys made everyone happy wherever she went. These lines which come from a poem she wrote while in high school demonstrate her loving personality.

Take your neighbor by the hand,
And tell him with a smile,
That being friends with everyone,
Makes this old world worthwhile. 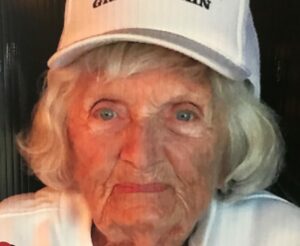 No comments to show.
We use cookies on our website to give you the most relevant experience by remembering your preferences and repeat visits. By clicking “Accept”, you consent to the use of ALL the cookies.
Do not sell my personal information.
Cookie SettingsAccept
Manage consent

This website uses cookies to improve your experience while you navigate through the website. Out of these, the cookies that are categorized as necessary are stored on your browser as they are essential for the working of basic functionalities of the website. We also use third-party cookies that help us analyze and understand how you use this website. These cookies will be stored in your browser only with your consent. You also have the option to opt-out of these cookies. But opting out of some of these cookies may affect your browsing experience.
Necessary Always Enabled
Necessary cookies are absolutely essential for the website to function properly. These cookies ensure basic functionalities and security features of the website, anonymously.
Functional
Functional cookies help to perform certain functionalities like sharing the content of the website on social media platforms, collect feedbacks, and other third-party features.
Performance
Performance cookies are used to understand and analyze the key performance indexes of the website which helps in delivering a better user experience for the visitors.
Analytics
Analytical cookies are used to understand how visitors interact with the website. These cookies help provide information on metrics the number of visitors, bounce rate, traffic source, etc.
Advertisement
Advertisement cookies are used to provide visitors with relevant ads and marketing campaigns. These cookies track visitors across websites and collect information to provide customized ads.
Others
Other uncategorized cookies are those that are being analyzed and have not been classified into a category as yet.
SAVE & ACCEPT